Lake Rowlands Dam, formerly known as Coombing Dam, is situated on the Coombing Rivulet, a tributary of the Belubula River. The Dam was designed in 1939 by Gutteridge, Haskins and Davey as a reinforced concrete slab and buttress type dam with a top water level (TWL) at RL 882.70m. This type of construction is rather unusual, and the dam is one of only a handful of slab and buttress dams built in Australia.

Construction of the dam was carried out in the period 1949 to 1954 under the supervision of Gutteridge, Haskins and Davey.

At the design TWL water could be supplied by gravity to Tottenham, a distance of 264 kilometres, in a pipeline which was designed to service Canowindra, Forbes, Trundle and a number of smaller communities enroute. When the Municipality of Forbes did not join the scheme the pipeline serving Forbes was eliminated. The size of the main pipeline from the dam to the Grenfell take off near Gooloogong was reduced and the dam TWL was constructed to RL 877.82m, almost 5 metres below the original design height.

A buttress dam has an upstream face in the form of concrete slabs, supported by buttresses. The face has a slope of about 45 degrees.

The dam is constructed across the main channel of the Coombing Rivulet, joining at the northern abutment to the earthen embankment on the gently sloping northern bank.

The spillway discharge is by free fall from the top of the face slabs; an emergency spillway channel is also provided north of the earthen embankment with a crest level 0.6m above the crest of the concrete wall at the centre of the dam.
There are two trunk mains drawing water from Lake Rowlands. One of these is a 375mm gravity main to the Carcoar Filtration Plant. 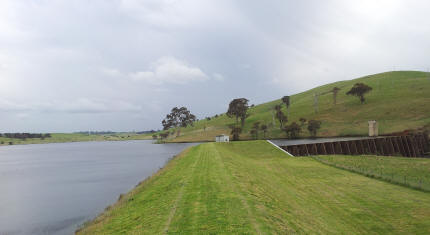 Since about 1997, Council has been lobbying the NSW State Government to grant the necessary approvals for the enlargement of Lake Rowlands from 4,500ML to 26,500ML.

The first submission to the NSW Government was as a result of approaches from two significant gold mining operations in the Orange and Blayney areas needing to improve their water security.

A number of studies were conducted at that time the most significant being a foundation investigation study carried out by Rob Parker Engineering on a proposed new dam site 2.5 kilometres downstream of the existing dam wall. The study found that the site was suitable for a 26,500 ML roller compacted concrete dam.

The NSW Government was not forthcoming with any approvals at that stage and, in the meantime, one of the gold mining companies dropped out of the equation after they abandoned their operation at Blayney due to flooding from a fractured underground aquifer.

This study, completed in November 2006, once again highlighted the need for the expansion of Lake Rowlands to provide water security for the economic development in the Central West and the growth and development of Orange City.

The study was presented to the NSW Government in a further submission and in March 2007 the then Minister for Water, the Hon. Ian MacDonald MP, visited the proposed new dam site and was extremely impressed with the proposal and stated that, if his government was elected on the following Saturday, he would facilitate any submission made by the Water Authority (Central Tablelands Water). Minister MacDonald’s government was re-elected but the necessary approvals have not been forthcoming.

Once again, with the record drought being felt right across the Central Tablelands and Central West, water shortage and water security became an increasingly alarming issue and the Centroc group of Councils, of which Council is a member, convinced the NSW State Government to fund a $500,000 Water Security Study for the Central West.

This study, which was championed by the previous Minister for Water and former Premier, the Hon. Nathan Rees MP, was completed in October 2009 and in its findings recommended the option of enlarging Lake Rowlands and associated transfer pipelines as the best means of providing water security to the Central West through to 2059.

The current situation finds Centroc in the position of now lobbying the State and Federal Governments to support the recommendations of the report, provide the necessary approvals (State) and provide capital funding. 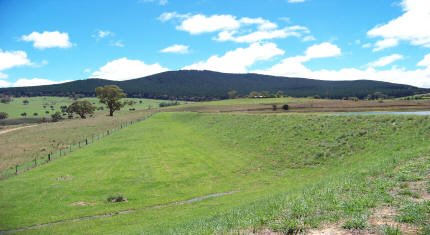